About a half dozen times a month I find myself inspecting a remote computer and invariably the question comes up “how long has this computer been up?” I always find myself looking up how to get computer uptime in Powershell and I always look for Doctor Scripto’s blog post where he shows a one-liner that can tell you a computer’s uptime: 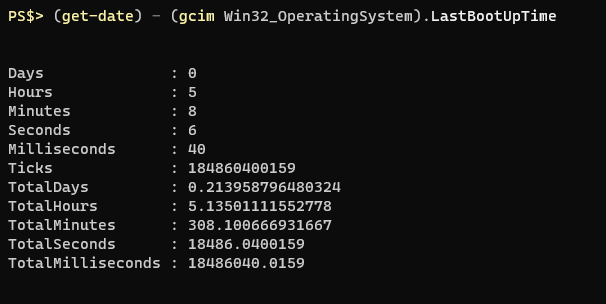 Totally sufficient. I’m usually in a remote Powershell session anyway and just copy/paste the command. I decided today that I would finally just buckle down and write a function to incorporate in my every day module that would allow me to query my own computer’s uptime as well as a remote computer. Since the info is also in the Win32_OperatingSystem class I thought I would include the date of install as this is often the “imaged” date at work which can be helpful to know as well.

Within about 10 minutes I had a rough draft of the function and it was successful in returning the information I wanted.

I clicked “Save As…” in VS Code and navigated to the folder where the other functions were stored only to see that there was already a function of the same name there dated just two months ago. I opened it to look at the contents and found that I had indeed written it, with some inspiration borrowed from online (and credited as such) but I didn’t actually like the way it was returning info. It also had a bit of a problem when it came to handling pipeline input. I relocated the “old” one and saved the new one in its place.

Tip of the day: ParameterSetName=”none”

The beginning of my new function was looking a lot like most of my new functions; I had declared cmdletbinding and a parameter block. Originally I had a “ComputerName” parameter to allow for specifying a computer other than the one you’re on, and then I thought to add a “Credential” parameter in case I needed to provide different credentials for the remote computer.

I quickly changed the first part of my function to look like this, and it worked!

It’s a pretty unlikely scenario that I, or someone else, would call the function with JUST the “Credential” parameter and not the computer name, this was more of a proving ground type situation.

That’s all for now. Until the next light bulb moment.