A coworker from a neighboring department had an interesting request one day. They wanted a scheduled task to run on a server. Through whatever mechanism the task would look in a series of folders for PDF files. If it found PDFs it would then FTP upload them and when complete move the files to an archive server for safe keeping. A good job for Powershell with a lot of fun components to it but I want to focus on one aspect: how to save the FTP credentials in the script securely. At some point everyone has probably come across this in a script somewhere:

This wouldn’t fly here. Typically I would handle this by having the script prompt the user for the credential at the execution of the script using Get-Credential: 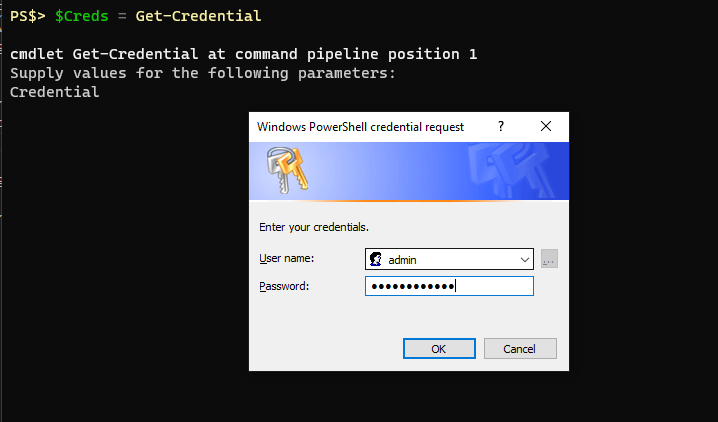 What’s convenient, and secure, about the use of DPAPI with ConvertFrom-SecureString is that the encryption key is derived from the current user on the current machine. This means that if I saved that string to a file only my user account on that computer would be able to convert it back in to a SecureString object and use it in a script. If your account got hacked then an attacker could reveal the plain text content of these saved SecureStrings.
My first thought was that there should be a dedicated service account for use with this Scheduled Task. It would have no logon rights and a very complex secure password. This account, on the intended server/computer, would then be the one to take the FTP credentials, convert them from a SecureString and save them to a file for later use. This way, any other administrator of that server would just see encrypted junk in the file and no amount of Powershell-fu could reveal it to them.
The Powershell to collect the credentials and save them to a file is pretty simple:

It will then pop up the standard Get-Credential GUI prompt. Fill out the fields and hit enter. Now we’ll use a cmdlet called “Export-Clixml” to save the entire PScredential object to a file for ease of importation later.

If you look at this XML file in a text editor you can see that this cmdlet saves what type of Powershell object it is and contains both object properties: UserName and Password. You can see the password is a DPAPI encrypted string.

Using the companion cmdlet Import-Clixml you can easily create a PScredential object with these saved credentials.

First I run “whoami” so you can see the session is running under my account then I start a job that executes “whoami” as part of the script block and lastly I provide the “-Credential” parameter and specify a different user account (FTPuser). I receive the job, which would be the output of the executed “whoami” script block and as you can see it returned the username “FTPuser”.
The workflow would then be:

Then in the primary script the FTP credentials can just be imported via Import-Clixml from that file. It’s pretty common for service account passwords to be set to never expire meaning that this whole exercise might seem pointless but nevertheless I wanted the end user to have the option to change the saved password if they wanted.
Here’s an example of what this script might look like:

The last three lines were added to support better execution of this script via a shortcut. The administrator then simply double-clicks a standard Windows shortcut and is greeted with a Powershell window, and then prompted for the credentials. The shortcut might look something like this: 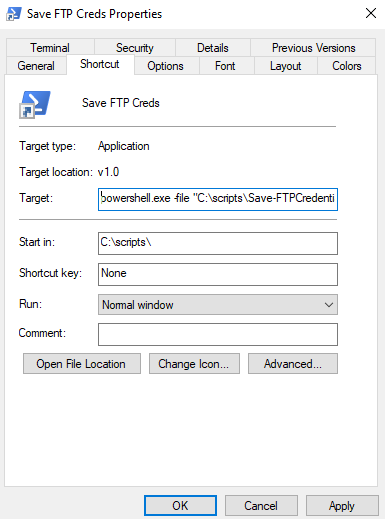 The behavior at the end is simply that when the user hits “enter” (or really anything to satisfy the Read-Host cmdlet) the script moves to the next execution statement which is an “Exit” causing the window to close.
You may have also noticed the lines regarding validating the service account credentials are correct. This is just another sanity check to deal with the potential error of the administrator providing an incorrect password for the service account. Had we not validated it there then the Start-Job cmdlet would have likely generated an error when the credentials didn’t work. Since I had written this little validation block before I thought I would recycle it.

There you have it. A secure way to leverage service accounts, Windows Task Scheduler, Powershell and saved credentials.